We are celebrating over 100 years of Rotary in Chester.

Our Club history dates back to 14 May 1921 with an announcement in The Chester Observer. “This week we have the pleasure of welcoming a new institution in our midst it having been decided to form a Rotary Club in Chester”
Many citizens, while familiar with the name are unacquainted with the objects of a Rotary Club. Rotary is international and its motto is “Service – not Self”.

One of Rotary’s aims is friendship (known as fellowship in Rotary terms) and members sitting at random soon got to know one another quite well.     Reports of the early days of the Club are reported in the Executive minute books which were prudently deposited at the Cheshire Record office.

In 1923 the club moved to the Blossoms Hotel where the Blossoms lunch was stated to be 2/6 per head, or 2/8 including tea or coffee.

On the 40th anniversary of Rotary’s formation in Chicago (1945) the Club  arranged a Social Evening at Quaintways Restaurant (with dancing!) in February.

In May 1967 there is the first mention of a frugal lunch where members pay the normal cost for a sandwich lunch to raise money for charity. The practice has continued to this day.

In 1981 the President, Matt Wesley, indicated that he would like the Club to support cancer research at Clatterbridge hospital and Friends of Clatterbridge. Equipment costing £7000 was identified and the Club established a target to raise this. It was decided to pursue the idea of a sponsored run (this event later became the Chester Half Marathon

The mainstay fundraising project of the Club in recent times has been, the annual Chester Raft Race, was held every year since the start in the 1970s.  The race developed into the City’s premier river event, and has over the years raised many thousands of pounds for charities and good causes, both local and international

Perhaps the best efforts at fundraising was the Club’s response to the Tsunami which struck parts of South East Asia on Boxing Day, 2004. We were all horrified by the pictures of devastation caused by a huge tidal wave shown over the Christmas period. Club President, Colonel Jeremy Ropes, led the initiative to get permission and organise street collections in Chester. With help from Deva Club we collected a staggering £22,500.

The money, matched by that raised by other clubs, was used to buy 30 fishing boats and to support a trauma and emergency shock room at Base Hospital, Hambanthota in Sri Lanka

In March 2020 meetings were suspended as a result of the pandemic.  Meetings were held on line, and some members discovered IT skills in using new technology.

Face to face meetings resumed in July 2021 with a party in the incoming President’s garden.  David Cotgreave, having been President in 1997/98, was again installed and the outgoing President (Prof Simon Burtonshaw-Gunn) had the unique honor of never having worn the chain of office at a meeting.

In July 2021 lunchtime meetings resumed at the Mill Hotel Chester.

On 4 March 2022 Chester Rotary organised a bucket collection at the Chester Vigil for Ukraine.  In less than 1 hour, £2922 was collected in front of Chester Town Hall, and was donated to the Red Cross Ukraine Appeal. 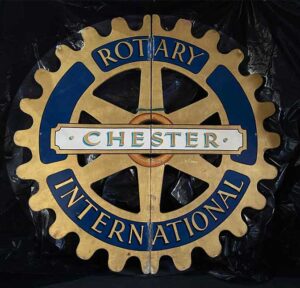 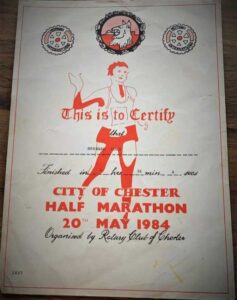 Chester Half Marathon 1984
Organised by the Rotary Club of Chester 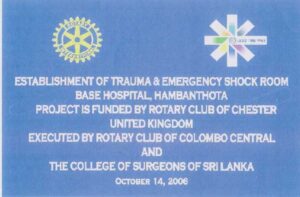 A plaque at a Sri Lanka hospital 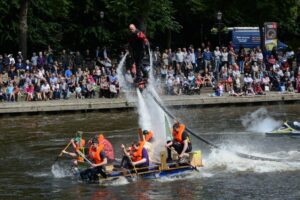 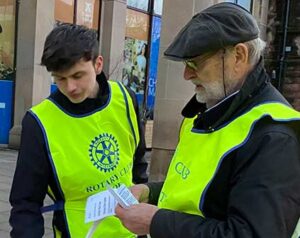 Rotarians collecting for the Ukraine appeal

Club History of Rotary in Chester

To commemerate our Club centenary, Rtn Brian Westcott authored a book titled “A history of the Rotary Club of Chester”.  At just under 10,000 words, the book contains many stories and images from the 100 years of our existance. 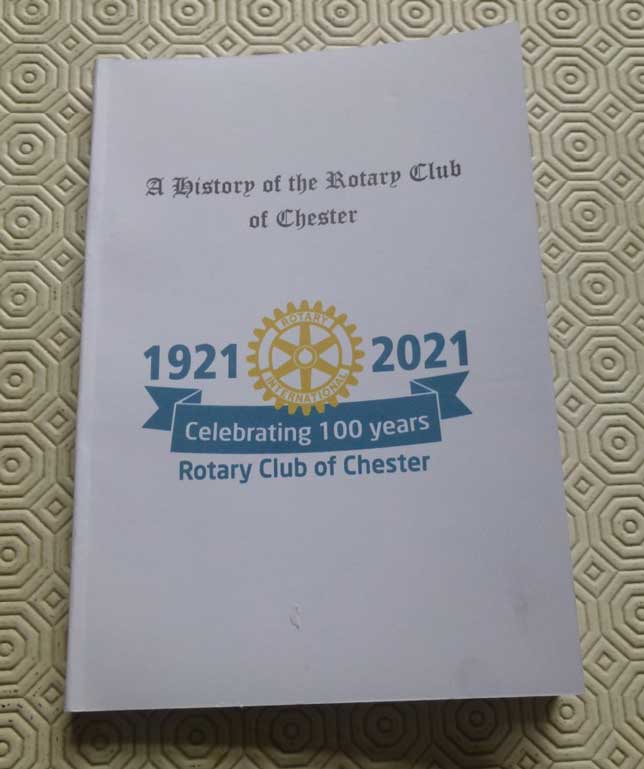 A Paul Harris Fellow is a person who has been recognised as having done something significant for others. The Rotary Foundation recognises them for the contribution of $ 1000, which will be spent on Humanitarian efforts around the world.

A club recognises them for service to the club and or the community. Individual Paul Harris Fellows recognise others for many reasons; admiration, service, love or whatever.

In ALL cases the recognition is significant and something to be proud of. 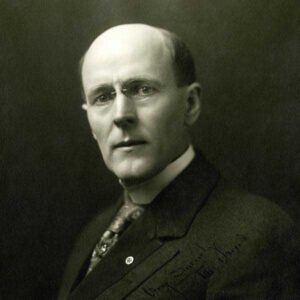 Who was Paul Harris?

Paul Harris was the founder and organizer of the first Rotary Club in Chicago in 1905. He was founder of the Rotary idea, and the first president of the worldwide organization, Rotary International. Paul Harris died in 1947. Upon his death, memorial gifts poured in to honor the founder of Rotary. From that time, the Rotary Foundation has been achieving the noble objective of furthering “understanding and friendly relations between peoples of different nations”