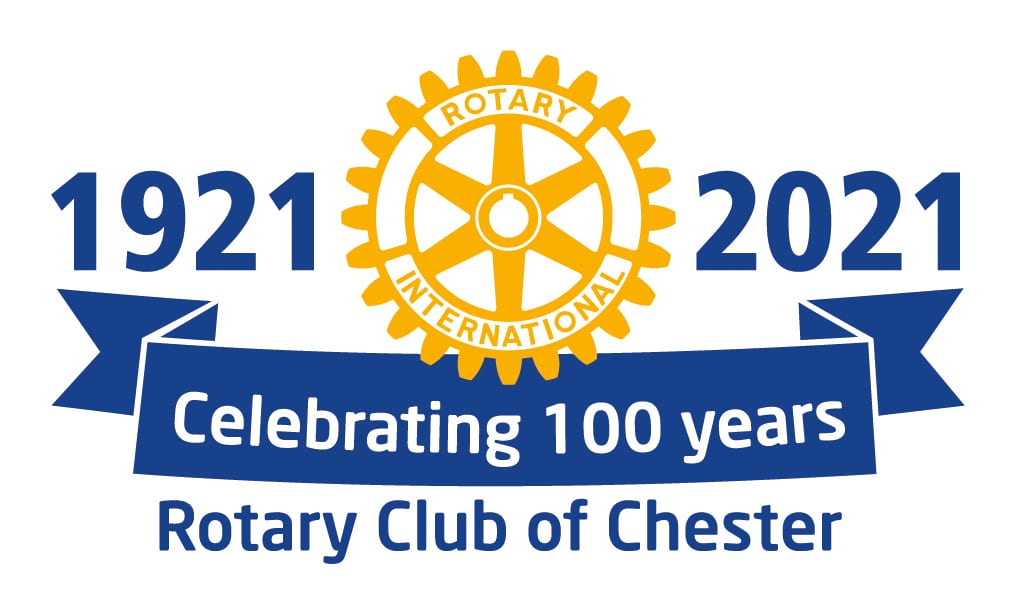 The Rotary Club of Chester was founded in 1921 and to mark the centenary a book has been published tracking the history of the Club over the hundred years of its existence. Written by two past presidents, Brian Westcott and John Elsley, sources rely on minutes of meetings which go back to 1921, newspaper cuttings and memorabilia collected over the years. In recent years we have been able to use the recollections of current members and photographs of events.

The book describes the development of one of the oldest Rotary clubs in the area and should be of interest to Rotarians and others. 95 pages. Price £5.00

If you would like a copy please email us at mail@rotaryclubofchester.co.uk

… many citizens, while familiar with the name are unacquainted with the objects of a Rotary Club. Rotary is international and its motto is “Service-not Self”.

One of Rotary’s aims is friendship (known as fellowship in Rotary terms) and members sitting at random soon got to know one another quite well. Reports of the early days of the Club are reported in the Executive minute books which were prudently deposited at the Cheshire Record office.

On the 40th anniversary of Rotary’s formation in Chicago (1945) the Club arranged a Social Evening at Quaintways Restaurant (with dancing!) in February.

In May 1967 there is the first mention of a frugal lunch where members pay the normal cost for a sandwich lunch to raise money for charity. The practice has continued to this day.

In 1981 the President, Matt Wesley, indicated that he would like the Club to support cancer research at Clatterbrid

ge hospital and Friends of Clatterbridge. Equipment costing £7000 was identified and the Club established a target to raise this. It was decided to pursue the idea of a sponsored run (this event later became the Chester Half Marathon).

Perhaps the best efforts at fundraising was the Club’s response to the Tsunami which struck parts of South East Asia on Boxing Day, 2004. We were all horrified by the pictures of devastation caused by a huge tidal wave shown over the Christmas period. Club President, Colonel Jeremy Ropes, led the initiative to get permission and organise street collections in Chester. With help from Deva Club we collected a staggering £22,500. The money, matched by that raised by other clubs, was used to buy 30 fishing boats and to support a trauma and emergency shock room at Base Hospital, Hambanthota in Sri Lanka

In 2015 the Club moved from the Blossoms Hotel to the Crowne Plaza Hotel (where it meets today – or will. post pandemic!)